December is here, in all its cold, dark, and dreary glory. The days are short, the snow comes and goes, and the wind is bitter. These are the days when we do what we can to ward off seasonal depression and an ever-looming dullness. It is a welcome relief then, that Helsinki does not go into hibernation this time of year. Quite the contrary. Finns seem rather adept at staying active and embracing the wintry months as much as the sunny ones. They see no reason to stay indoors, despite the fact that the sun now sets at ten past three. And why should they, when there is so much festivity to be had?

The last weekend of November was when the lights were turned on downtown. (At 4 pm mind, because that’s when it was dark.) Just after the lights, there was a parade. From different dog clubs (the Basset hounds were my favorite, sniffing for treats in the tram tracks), to the Finnish ballet, and of course Moomins, there was something for everyone. We had been warned in advance of the crowds, which are to be expected in a large city, but my goodness! There were no cordons along the street, so people really were dashing out to get pictures and still vying for the best view up and down the street. Police officers walked ahead of any horses, ensuring people were standing on the sidewalks, out of harms way. 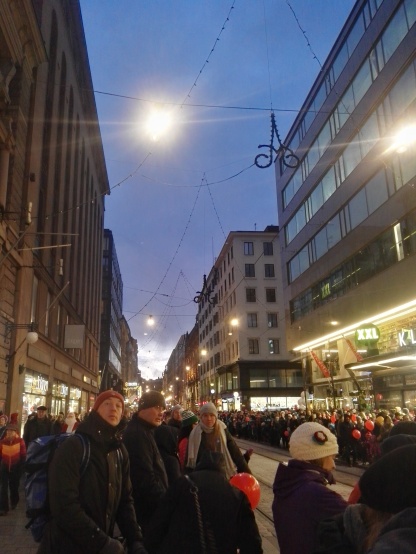 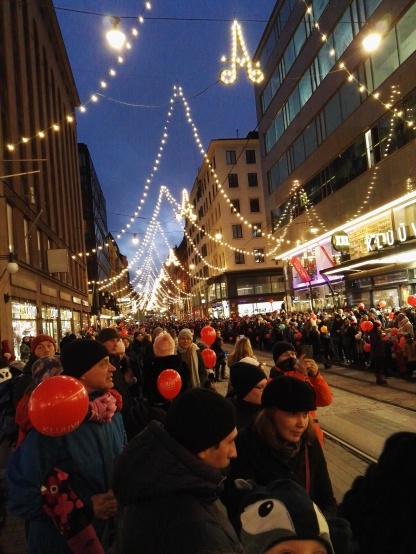 I feel I would be remiss in my expat duties if I only told you about the successes. As you know, most expats have a difficult time finding their footing, and holidays can be especially challenging. When I heard about a “Christmas Path” aimed toward children, I was determined to go. It took place on an island, which is home to an open air museum. We had been there a few months ago for the summer solstice bonfires. Let me just say that it was an entirely different experience in the winter. The Path was open from noon to five, but we decided to wait until after Little Man had a nap. Mistake number one. It was after two by the time we left home, and I had forgotten that it takes about an hour to get to the island. When we finally did arrive, the greeters had run out of English guides, but we were able to download it on our phones. The Path had some twenty-six different stops, each offering a different Christmas-related activity or viewing. There were singing stations, Santa was there to receive pacifiers from older children, and Christmas porridge was offered for free to children in B.Y.O.B. (bring your owl bowl) fashion.

Sounds lovely, right? Most people did seem to be enjoying themselves. I, however, was not one of them. There are only so many times you can feel completely out of place before you call it quits. It was so incredibly crowded, there was hardly any order when queuing, the path was dark and muddy, and the whole thing was just so entirely Finnish. We ended up not staying long, and trekked back through the woods to a bus stop. At least I can say I learned from this. I learned that next year, we will try it when it’s light outside, or bring a torch (flashlight). I also learned that most things that say “kid friendly” mean four years or older, unless specified. It was one of those experiences you just want to shake off and move on from.

Not to be downtrodden for long, Husband and I ventured to the Christmas market last weekend, with Little Man in tow. What’s nice about this is that it’s right down town, and we’d been last year, so we knew what to expect. It’s beautiful.

There are multiple vendors, selling all sorts of amazing products from meat and bread, to jewelry and hand knit items, wood and metal works, to sculptures, reindeer pelts, and fudge. Each vendor has their own wooden stall, resembling the summer cabins you see dotted around, and it’s so uniquely Finnish you just shouldn’t miss it. I love this market because no one is pushy about selling their goods. You can wander through the whole thing and hardly have anyone speak to you at all, or, if you prefer, you can chat with the vendors, all of whom are friendly and speak English, though in varying degrees of proficiency. (I didn’t have any problems communicating, other than thick accents deterring my ability to understand certain words. Nevertheless, it was a pleasant experience.) Most stalls accept credit cards; there are a few that are cash only though.

Being the Christmas market, we did pick up a few gifts. Husband’s family is actually part Finnish, his grandmother being first-generation American born to Finnish parents. To this day, his great-aunt is quite proud of her Finnish heritage (who wouldn’t be?) and we picked her up a couple trinkets.

How cute are they?! We couldn’t pass up the reindeer meat stand, selling smoked reindeer, reindeer sausage, and  reindeer salami. They offer samples, in case you’re not sure about eating Rudolph. (If you’re not, you should be. It’s absolutely delicious.)

The (for lack of a better word) strangest thing we obtained on this outing had to be the fish bread. Let me explain: it’s a bunch of fish. Baked into bread. This is a cash only stand, but the man there was very nice. I misunderstood the amount he quoted for a whole loaf (32€!), and when I explained that we didn’t have that much cash, he let us buy a half loaf for 16€. Lucky for us, because, while worth the taste test, it’s not something I will actively seek out in future.

One of the first stalls we came across was that of a blacksmith. They mostly had different candle holders, along with a few other items. (Makes sense with the early darkness; people enjoy candlelight.) We had seen one that we liked, but decided to walk through the whole market before deciding whether or not to buy it. This is actually the only blacksmith stall we saw, so when we came back around, we made the purchase.

On our way out, we stopped for a hot cup of glögi, a warm, spiced drink, alcoholic or not (as in this case), and just the thing to ward off the winter chill.

After all the Christmas cheer, we went home to light our menorah. Seriously! I figured with Little Man soaking up everything around him, this would be a good age to start celebrating the Jewish holidays. Besides, who doesn’t love latkes (fried potato pancakes) and jelly-filled donuts? And, Hanukkah being a celebration of light, it’s a wonderful holiday to observe in the midst of the Finnish winter.

Happy holidays, everyone! Whatever you celebrate.

I am an American expat, currently living in Finland, with my husband and three-year-old son, aka Little Man. I started this blog to share my experiences and highlight the differences between living in the United States and Finland. I’ve since expanded it to include writing about traveling with a toddler to various countries. (Yes, it is possible!) Expat life is challenging, exciting, and mind-blowingly different than you might expect. There have been ups and downs, but the lessons I’ve learned, both life lessons and about myself, have been incredible. If you’ve ever thought about living abroad, particularly in Finland, I hope you find my posts helpful. And if you think traveling abroad with a toddler is crazy, you’d be right! But it’s also rewarding and worth the effort. View All Posts

8 thoughts on “Holidays in Helsinki”

London Called, So We Called at London

The Hidden WWI Park in Helsinki